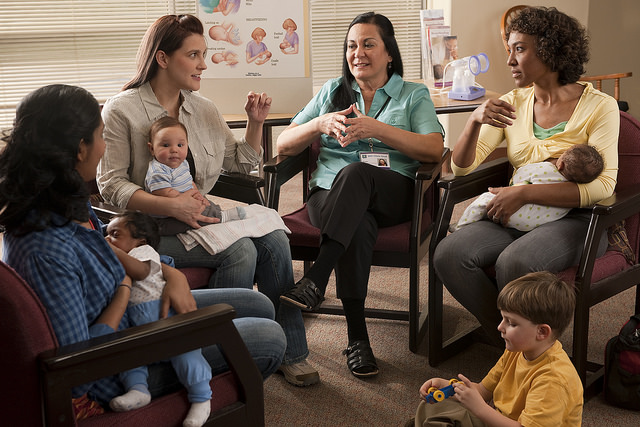 “New mothers need to suckle their babies right after birth to help them get their milk flowing well”.

This quote, by Inuit Elder Lena Wolkie, appears in an Inuit booklet for expectant moms. Lena is passing on the traditional practices of her people, including how to get breastfeeding off to a good start.

We now know that these traditional practices are optimum for successful breastfeeding.

Now the “new” practice of putting babies immediately to the breast after birth is becoming “standard” practice in North American maternity centres.

How soon we forget!

Before the aggressive marketing of formula to the First Nations people in northern Canada, everyone breastfed.

A pediatrician I know had done one of her residencies in a remote First Nations community in the North. The community had had very little outside contact. They had never heard of formula.

She was stunned to find that, contrary to what she had found in her other residencies, no one in that community had breastfeeding problems. There were some sore nipples, but they had excellent natural remedies for that.

But now infant formula has made its way into those communities. And as a result, there are more breastfeeding problems and fewer mothers nursing their babies.

I just returned from a wonderful trip to Inuvik, far north in the Northwest Territories of Canada. I had the privilege of meeting with doctors, nurses, midwives, and postpartum and breastfeeding support people.

Everyone I spoke to talked about  the consequences of reduced breastfeeding both in terms of diminished baby and maternal health and well-being, and the development of attachment and emotional well-being of mothers and babies.

It’s a serious problem and they are all working hard to bring back traditional breastfeeding practices which they knew were so beneficial to the overall health of babies and mothers alike.

While I was there, they were making plans for their Breastfeeding Week as part of the effort to normalize, encourage, and restore breastfeeding to their communities.

In my community and throughout Canada, people are planning for Breastfeeding Week for the same reason.

I am often asked why we still need a Breastfeeding week when so many moms are choosing to breastfeed.

The answer is simple. We are still a bottle feeding culture.

So many pregnant moms I talk to say they will “try” to breastfeed. There is an expectation that it will be difficult, maybe painful, maybe they won’t have enough milk, they have to go back to work and won’t be able to, they’ll be too embarrassed, etc.

Many have friends who really struggled with breastfeeding, some of whom gave up.

Many moms were themselves formula fed as babies, so their own mothers don’t know how to help them.

When problems arise, they say, “Just use some formula. It’s so easy”.

And ultimately, when it comes to breastfeeding, society as a whole is non-supportive.

For example, we have had court rulings in Canada, the US, and Great Britain, defending a woman’s right to breastfeed her baby “anytime and anywhere”.

I’ve even had personal experience defending my right to breastfeed in public.  In the 80’s I was thrown out of a restaurant for nursing my son. I was told “You can’t do THAT in here.” (They later came to regret it. As I walked out of the restaurant I turned to the manager and said, “You have thrown out the wrong person.” I went very public about it and the restaurant eventually gave me a public apology and changed their policy).

Even with the “law” on our side, women throughout Canada and the US are still told they can’t nurse in various public facilities. Some of those women speak up and there have been protests in support of women’s right to breastfeed, usually successful.

But the question still remains. Women have been successfully breastfeeding their babies since humans first appeared so why is it only in the last 75 years that women have had so many problems?

It is not an accident.

When I was born, my mother was told by her doctor and the nurses in the hospital that in no uncertain terms, she should not breastfeed.

Unfortunately, I was a very allergic baby and couldn’t handle any of the formulas they gave me. After constant vomiting and losing weight, they finally found some concoction that I could keep down. I ended up with severe asthma, hay fever and eczema for most of my childhood, well into adolescence.

And this scenario wasn’t unique to just me.

It didn’t take long for the anti-breastfeeding message my mother received to spread throughout North America (and eventually around the world).

Before we knew it, we had lost, in the space of one generation, all the knowledge and wisdom about breastfeeding that had been passed on from generation to generation for millennium.

It was La Leche League that brought  breastfeeding back. Seven determined women in the 50’s (when only 20% of women were breastfeeding) decided that they wanted to do what nature intended and support each other to breastfeed their babies.

With their personal successes, other mothers approached them for help.

Through mother to mother help, they re-established breastfeeding in North America and now are active around the globe. (For a great summary of La Leche league’s beginning check out this wonderful 10-minute video where you’ll meet the founders and learn its history)

And here we are today.

As many of you know, I have been helping moms to breastfeed for over 30 years, as a La Leche League Leader and an Internationally Board Certified Lactation Consultant.

I love-love-love helping moms overcome breastfeeding difficulties. So often all that is required is a few changes in technique, some relevant, well-documented information and huge amounts of encouragement.

When moms feel that they really can do it, they usually can.

I have seen such amazing determination, truly heroic efforts by moms who so want to breastfeed their babies. They work through all kinds of difficulties, sometimes through excruciating pain.

What keeps them going is their great love for their babies AND, and it’s an important AND, the love and support of their partners and families.

Without that support, it’s very hard to persevere and it becomes too easy to undermine a breastfeeding mom’s confidence.

So why do we need to celebrate Breastfeeding Week?

So we can be sure that every mom who wants to breastfeed is given all the support she needs, from health care professionals, breastfeeding support groups like La Leche League, every member of her family, all of her friends, people on the street, in restaurants, in other public places, her employers, her child care providers, the media, the legal system….everyone needs to be on her side.

If you are a breastfeeding mom and need help, reach out and ask for it.

If you have a breastfeeding mom in your life, give her all the support she could possibly want.

And if you see a mom breastfeeding in public, give her a big smile and a big thumbs up!