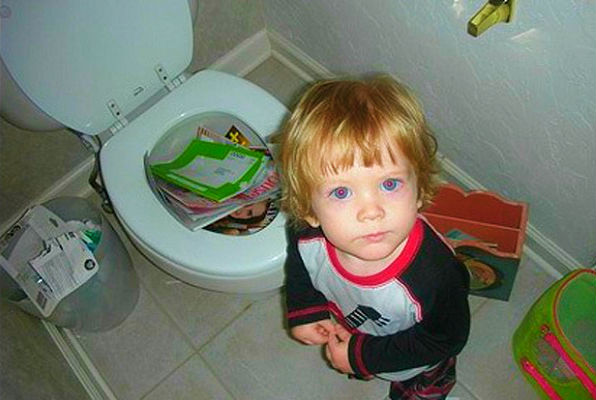 “Who took all of my jewelry out of the box?… and who stole my necklace!?”

Your jewelry is scattered all over your bedroom. Your favourite necklace is nowhere to be seen.

There is no sign of “break and enter” and the only other person around is your 3 ½ year old.

“How could he say that? He knows he did it. Why doesn’t he just confess? Has my child turned into a liar? What have I done wrong?”

This is a scary moment for many parents.

It’s so obvious what has happened but your child is in complete denial. Does this mean that your preschooler is heading for a life of lies and crime?

Lying like this is a very common and a totally normal thing for preschoolers 2 ½ to 5 or so to do. And more importantly, it’s very common for them to believe that their undeniably wrong version of the story is actually true.

And there’s a few good reasons why.

You have probably noticed that as your children move into the preschool years, something very magical takes place; their imaginations truly begin to take wing.

Their toys take on a new life and become props for their imaginary world.

They turn anything they can turn into a costume so they can be someone else, or something else.

They also create imaginary friends who are totally real to them. (and yes, you may need to set an extra place for the invisible friend at the table)

This is truly their age of “make believe”.

And if you allow yourself to step back and watch your children in imaginative play, the important word here is “BELIEVE”.

When children are immersed in their fantasy play, they ARE who they pretend to be. The stories they are creating are absolutely real to them in the moment.

For them, the line between fantasy and reality is totally blurred.

And that means that the line between truth and fiction is totally blurred as well.

So, what does that mean for the little bandit in my story? It means that he believes that he didn’t take your jewelry and he will earnestly tell you that he didn’t. To him, it’s not logical or “realistic” that he took anything – yet there really isn’t anyone else around who could have done it.

His power of imagination – combined with the his emotional need to not upset you – makes his imaginary version of events totally true for him.

If you are honest with yourself, you already know a child’s imagination can be truly powerful. Otherwise you wouldn’t tell them the big elaborate story about Santa Claus, or the Easter Bunny, or the Tooth Fairy.

Parents know that their children will really believe anything they are told. Because in their world it makes absolute sense.
….

When I taught preschool and we had circle time, we always had a sharing time.The children could share any news they wanted. I was amazed daily at all the places their families had gone the previous day, and what fabulous adventures they just had in outer space, and how their dog told them a great story.

Were they lying? You could say yes.

But I would say no.

They were letting their imaginations fly.

When stories were particularly outrageous I would say things like “Wow, wouldn’t that be fabulous if it happened?” or to the group “Can you imagine that happening?” (some would answer “yes”, some would answer “no”)

Interestingly, developmental research shows that the richer a child’s imagination is in the preschool years, the more creative they are later on in life, the more “intellectually flexible” they are, and because they can freely express what they are thinking and feeling in their play, the more emotionally grounded they become.

Imaginative play enhances every aspect of a child’s healthy development. And it’s truly to be treasured and allowed to blossom.

One of the signs of abuse, neglect, high stress or serious economic deprivation in young children, is their inability to pretend and imagine. The part of their brain where imagination originates has been overrun by stress hormones and has not been able to develop as it was meant to. This has unfortunate lifelong implications.

Going back to the little boy who said “I don’t know”, what’s the best approach to this kind of situation?

On some level he knows he did it, but it’s buried pretty deep. Forcing him to confess rarely works. It’s important to find a way for him to claim some responsibility in a nonthreatening way.

Using words like… “Well I see that my jewelry is out of the box, so let’s put it back in together. And once we do that we’ll look for my necklace and see where it might be.” Odds are you or he will find it.

The capacity for children to completely immerse themselves in fantasy fades away as they get towards 6 and 7. The actual neuronal structure and cognitive capacity of their brains change. Preschoolers brains operate most of the time in Theta waves (where our brains are when we daydream, “zone out” or meditate). As their child brain matures, they begin to separate reality and fantasy.

Children can hold on to their wonderful imaginative world if we allow them to be little kids longer and by not pushing them into growing up too soon. If we are playful and delight in their imaginations, and refrain from teasing them when they are 8 or 9 and are still playing with dolls or trains, we will allow their imaginations to mature naturally.

But even as children get older there is a need in them, and us as well, to have an imaginative world.

It’s why we daydream, read novels, watch movies, hang out on the internet, follow celebrities, write stories, draw pictures, set goals and intentions for ourselves, write affirmations, sing Karaoke, make holiday plans, read recipes we’ll never make, sign up for “get rich in 30 days” internet programs, watch travel shows of places we’ll never go, play games, dress up on Halloween… so many things that take us out of the present into the world of possibility.

This is our adult world of “make believe”.

It’s a big part of what makes us human and it enriches our lives.

So the next time you catch your preschooler in a bold face lie, try to relax. You are witnessing their imagination at play. By staying calm you can find a non-judgemental way to deal with the very real situation in front of you. Insisting that they “tell the truth” may lead no where except to tears.

Let your kids, and you, dream on!

Self-confident kids and the importance of taking risks

“Be back in time for dinner!” That was me as a kid as I ran…

What I’m about to tell you isn’t good news. Climate change is real. When I…